You are here: Home / Dustin Bajer's Articles / The Nature of Cities. Why Cities are Good for the Environment

Want to Help the Environment? Move To A City. The Bigger, The Better

Contrary to our cultural narrative, cities are good for nature. Why? Because cities are natural and governed by same processes that created ecological systems. In fact, cities may be the most useful tool we have for tackling some of the world’s most pressing problems. One study out of Yale University reported:

“New Yorkers have the smallest carbon footprints in the United States: 7.1 metric tons of greenhouse gases per person per year, or less than 30 percent of the national average. Manhattanites generate even less.”

How could this be?  In a single word – networks. Cities (like ecosystems) are tangled webs of links and relationships. Connections provide opportunities for sharing, cycling resources, and niches. And the more people a city has, the more connections are are possible.

The number of possibilities increases with the size of any given network. Niche opportunities form and quickly fill. Resources start to cycle and systems becomes more efficient. The more extensive a system is, the less energy it needs (per unit). Physicist Geoffrey West was able to show that the scaling of organisms (networks of cells) and is also correct for cities (networks of people and resources). The more massive an organism, the less energy it requires per pound of body mass. In the same way that whales require less energy (per pound) than mice, cities require fewer resources (per person) than towns.

The densely connected nature of cities means that urban dwellers require less energy and resources than their rural counterparts. West shows that if you double the population of a city, you get a 15% per capita savings on the resources it requires to function. In this context, the rapid urbanisation of our planet is good news – though, not without challenges. As of this writing, 180 000 people are moving into cities each day. As of 2010, more than 50% of world’s population lives in cities. In most developed nations, that percentage is closer to 80%. We are becoming an urban planet and cities might be one of our best tools for tackling climate change.

A City Is A Place For Maximizing Connections

If cities are good for the planet why do we believe the opposite? Probably because concentrating resources and opportunities also concentrate problems such as pollution and crime. The challenge for city builders is to maximise some effects while minimising others.

In contrast, poor urban design isolates us from each other, opportunities, and our potential. Poorly design designed urban spaces also separate us from nature.

We tend to view nature and cities and opposites – two forces in conflict. Far from it, I’d like to argue that cities are the product of the same ecological processes that govern and drives ecosystems. Cities are natural.

Ecosystems and Cities Created By Nature

Cities behave similarly. Governed by their connections, cities start off small but expand by creates new niches of possibility – what starts off as a small settlement expands to include many of the needs and services necessary to support the community. At each stage, the present builds the future. As new connections grow, the system expands, and new possibilities emerge.

If cities and ecosystems are parallel systems can we combine them? Can we create cities that benefit the environment? We’re going to have to. Such a city might be called the biophilic city and is the focus of architects and city planners such as Ricard Register (Ecocity Builders) and Timothy Beatley (Biophilic Cities Network). There no reason that cities couldn’t be among the most abundant and diverse systems on the planet.

Cities and ecosystems aren’t at odds because they’re the same thing – the sooner we realise this, the better our cities can be. 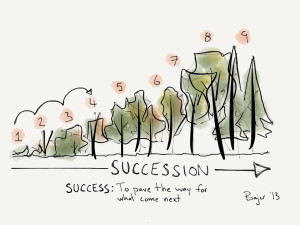 Ecological Succession. Each stage is built upon the last and creates the conditions necessary for the next. Succession is an upward spiral of ever-expanding diversity and potential. 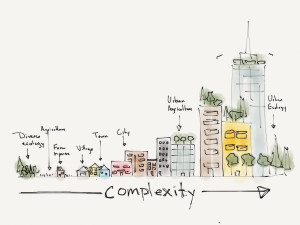 Cities undergo a form of ecological succession. Possible futures depend on what exists. Good design increase connections and opportunities – poor design does the opposite.