You are here: Home / Dustin Bajer's Articles / Should We Redesign Edmonton’s Flag?

In Search of A Better Edmonton Flag

In 2010 99% invisible put out a podcast episode about city flag design – mostly about how bad city flags tend to be. That got me thinking about Edmonton’s city-flag. For started – do we have one? As it turns out, we do, and it’s pretty terrible.

In the podcast, host Roman discusses the characteristics of beautiful city flags and the role they can play in placemaking. With the help of a flag expert (Vexillologist), Roman describes the following flag design principals:

Ouch! Stacked against Roman’s five rules, the Edmonton flag leaves something lacking. As it turns out, I wasn’t the only one to notice.

In early 2014, a citywide design challenge asked Edmontonians to redesign or reinvent the Edmonton flag. Naturally I took a stab at it – here are the three designs I came up with:

Edmonton Flag Attempts One and Two 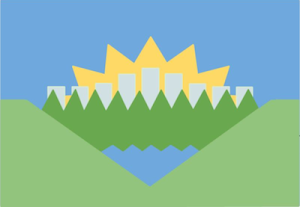 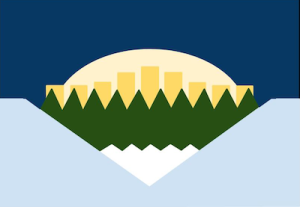 I see Edmonton is a social, economic, and ecological meeting place. Sandwiched between the Great Plains to the South and the Boreal Forest to the North, Edmonton is an environmental ecotone. Contrary to popular belief, Edmonton is not a prairie city but a city, on a river, in a forest. For economic and social reasons, First Nations have been a meeting on the banks of the North Saskatchewan for thousands of years. Eventually, other cultures joined and the city as we know it emerged from unique ecological, economic, and social niches.

The Magpie, like Edmonton, is an underrated and under-appreciated animal – resourceful, hardy, and social. Though we complain about them often, many of us secretly think they’re kind of beautiful.

Not convinced? Here are more 11 reasons why the Magpie defines Edmonton.

There’s been some interest in the YEGpie flag so drop me a line if you’re interested.

The Future of Edmonton’s Flag

Since posting this article, there has been some press and serious discussion around changing the Edmonton Flag. In any case, I believe that a future flag should embrace our past and present a point of pride for the future. And or course should meet the five rules for good flag design.

This site uses Akismet to reduce spam. Learn how your comment data is processed.